Per and poly-fluoroalkyl substances (PFASs) were arguably the most topical issue faced by the waste management industry in Australia in 2017, with the identification of environmental contamination due to fire-fighting foams at 18 different sites nationally as discussed in the media. This article discusses the chemical properties of PFASs, the history and the application of these materials. The emergence of this contaminant of concern requires further examination, especially into other industrial applications and consumer products containing PFASs.

Per and poly-fluoroalkyl substances (PFASs) are characterised by a carbon backbone with substituted fluorine atoms and organic functional groups like alcohol, carboxylic acid and amides. This chemical structure enables PFASs to persist in the environment, as they are chemically inert, resistant to degradation and being moderately soluble in water, they can be readily mobilised through water catchments. The US EPA is currently undertaking research to determine the long-term persistence, distribution and extent of PFAS in water environments and aquatic species.

In addition, PFASs can tolerate high temperatures and exhibit surfactant characteristics. These tendencies are what led to the use of PFASs in both consumer and industrial markets since the 1950s, these have included:

It is currently estimated that over 3,000 types of PFASs exist, with two of the most studied being perfluorooctane sulfonate (PFOS) and perfluorooctanoic acid (PFOA) (DWER 2017; Gallen et al., 2017). Research has identified that PFOS and PFOA have potential to bioaccumulate and are toxic to human and marine health. These findings were confirmed by the identification of these contaminants in a variety of ecosystems globally, with PFOS listed as a persistent organic pollutant under the Stockholm Convention in 2009, with PFOA anticipated to be added to the register. This has prompted investigation into the usage and sources of PFASs in the international community.

The manufacture and use of PFASs in commercial products has decreased since the identification of these contaminants in environmental samples worldwide. In 2000, 3M the major manufacturer of long-chain PFASs committed to phasing out the production of these chemicals voluntarily. A further reduction in PFASs production was facilitated by the US EPA, through the establishment of a PFOA stewardship program (2010/2015) with the major chemical manufacturers in the United States.

The focus of the chemical manufacturing industry has shifted towards reducing production quantities and developing shorter carbon chain forms of PFASs. It is thought that a shorter chain product could retain the desired characteristics of the end-use, whilst reducing the impact of these chemicals on the environment. Furthermore, additional research has focused on chemicals which have the potential to break down to PFASs, such as fluorotelomer-based polymers.

At present, in Australia there has been considerable coverage in the media regarding PFASs contamination from 18 different sites where fire-fighting foams were utilised by the Department of Defence. The level of contamination and migration pathways of PFASs are still being quantified from these locations, with potential consequences to groundwater systems near these sites.

It is evident that the waste management of consumer products containing PFASs will be a more complex issue to face, given the wide markets and end-uses that it is applied to, as discussed above. Further investigation will be required to characterise the variable formulation of PFASs across items and whether this would necessitate separation of PFAS types to lead to effective treatment and disposal.

The key issue with the management of PFASs disposal is the limited information regarding the chemical formulation of products, long-term persistence, environmental health and safety studies. Furthermore, the approach for the disposal of wastes containing PFASs is not unified at a national level, with three current strategies:

This variance in disposal strategies and limits for PFASs presents a challenge for the Australian waste management industry. It is evident that systems will need to be established to prevent illegal dumping and ensure the appropriate interstate transport of PFASs contaminated wastes.

Strategies for the remediation and treatment of PFASs contaminated wastes are dependent on waste type, typically split into contaminated soils and solid waste streams or liquid waste and wastewaters. For soil treatment technologies in Australia, the commercial treatment of PFAS in soil has been performed by immobilisation, indirectly through thermal desorption and some limited cases of incineration (Stewart, 2017).

PFAS contaminated water treatment technologies are currently being assessed by the scientific community (CRC CARE, 2017). It is anticipated that the most suitable treatment strategy would be via by absorption methods with activated carbon, resins and ion exchange polymers. Other technologies which are considered viable are nanofiltration and reverse osmosis. Collaboration is required across the waste industry, regulators and scientific community to develop an annual national inventory of industrial and products that utilise PFASs, strategies to mitigate the impact of these contaminants and prevent further entry of PFASs into the environment.

The Benefits of Using a Third Party CQA Consultant

Vote for our Photos in the 2020 ACigs Photo Competition 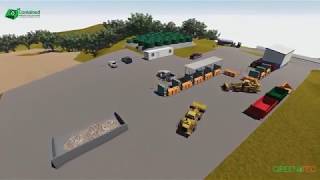